You are here: Home » Color for Interiors » Munsell

Here we will explain the Munsell Color Notation system in a simple way. It looks complicated, but broken down it is a logical way to look at color.

From experimentation with light we have learnt that the three primary pigment colors cannot be made from mixing any other colors, and that by mixing the 3 primaries we create the secondaries and then mixing one primary with one adjoining secondary color we create the tertiary colors.

The ability to mix all other colors from the three primaries is only possible with printer’s ink and photography.

Therefore, in paint, by mixing, it is not possible to create all colors from any three primaries.

The American Artist Albert Henry Munsell published a system in which he proposed a five pigment primary system, the principal hues using green, blue, purple, red and yellow. He wanted to create a “rational way to describe color” using an alphanumeric notation system rather than a haphazard color naming system. This is currently the most adopted way of communicating about color and forms the basis for measuring color in the world today.

Hue is the color and the way that we can tell one apart from the other i.e. red from blue. Munsell created a five color principal system Red, Yellow, Green, Blue and Purple and a 5 color intermediate system. Yellow / Red, Green / Yellow, Blue / Green, Purple / Blue, Red / Purple. Using these hues he created a circle divided into 100 compass points, each primary and intermediate color was placed at 10° intervals, creating a hue each sector around the circle as shown on the diagram. Each color had a letter to identify it, R – Red, YR – Yellow Red, Y – Yellow, GY – Green Yellow etc. He then documented a numeric system from 1-100 around the outside of the circle. (Zero is not used; it begins at 5, which is red).

Munsell believed that his system was a good tool for creating color balance and harmony, and could be used to select more exact color combinations.

The value defines the light or darkness of a color.

It is the neutral axis that shows us the grey level of a color.

In the Munsell System, the value scale ranges from 10 – Pure White to 0 – Pure Black.

The colors between are greys, and all combined, they are called neutral colors and have no hue.

The neutral value is notated with an N.

The value of a hue in Munsell Notation is placed after the hue identification, for example 5BG 3/ Blue Green at the value level of 3. 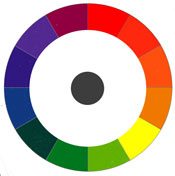 Chroma is the factor that shows the difference from a pure hue to a grey shade. This is the most difficult part of the notation system to grasp, as it does not have the same type of order as the previous two notations. High chroma colors are described as highly saturated and strong, low chroma colors are called weak or lack lustre.
An exercise to clarify the theory is to start with a paint hue, for example red, and a grey paint of the same value.
Mix them adding more red each time, put a stroke on a piece of paper after each addition, this creates a graduation of red colors that increase their intensity until they reach their full saturation at that level of the value.

This graduation is shown as opposite, on the value axis with the chroma axis extending from it at a right angle

Picture Above – This 3 – dimensional arrangement is called the Munsell Color Space.
The way to show this notation is after the value amount. I.e. 10YR 7/10 this shows Yellow Red hue with a value of 7 and a chroma of 10.

This is shown in a 3-dimension form known as the Munsell Color Space. Munsell’s original concept was based on a sphere or orb, but as each hue is worked through to full saturation, we see that the symmetrical theory does not work.

The neutral colors are the vertical axis with black at the bottom graduating through to the greys and white at the top. The individual hues are then positioned around the neutral axis. The chroma scale increases outwards from the axis, and just to add to the complexity of chroma, chroma is not the same for every hue at every value. The full chroma for individual hues is achieved at different places.

The reds, blues and purples are the stronger hues that have higher chroma values at full saturation at mid levels on the value scale, whilst the yellows and greens are weaker and average the fullest chroma saturation close to the neutral axis but at higher values. Therefore, the Munsell Color Space looks more like a tree than a sphere or orb.
To conclude, the success of Munsell’s Color Notation allows us to define thousands of colors in an alphanumeric language that can be internationally communicated. It is commonly available in books and standards, and a very useful tool to have.