You are here: Home » Stairs » What are Stairs

What are Stairs, or a Staircase?

The Definition of a Stair

What are stairs? The New Penguin English dictionary describes a stair as “a flight of steps or series of flights for passing from one level to another” .

However there are a great deal of components and design parameters that go into the stair, making it a very important subject for interior design.

To follow are a few stair definitions so that you can understand the language of stair design.

Stair: One step in a flight of stairs. Also called a stair step.

Stair bolt: A bolt used to fasten two pieces of a handrail together also called a handrail bolt.

Carriage: A stringer, which supports the steps

Staircase: A flight of steps leading from one floor to another. It includes all the components of the stair including landings rails stringers posts newel posts and balustrades. 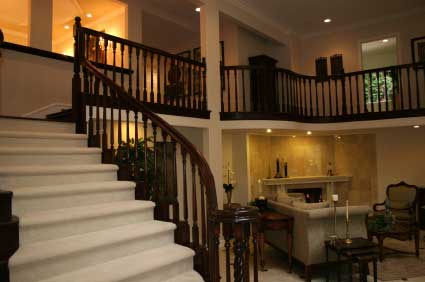 Correct design of a staircase means that not only is the journey safe and comfortable but is also aesthetically pleasing.

The rise or a riser: The vertical distance from one tread to the next. Also the vertically faced board connecting the treads.

The total rise is the total vertical distance of the risers.

The going is the depth of a tread (not commonly used).

The total going is the total horizontal distance of the treads (this is a term that is not used very often now days we usually refer to the pitch, tread sizes and risers to determine the type of stair i.e. public accessible private major and private minor.

Closed stairway: a stairway walled to both sides.

Baluster: one of a series of “poles” or turned columns that when used in series and with a handrail form a railing to a stair commonly called a balustrade.

Balustrade: A railing consisting of a series of balusters and handrail.

Stair well A compartment extending vertically through a building in which the stairs are housed.

Pitch: the angle that the stair rises at.

Accessible stairway: A stairway designed for use by people with disabilities.

Common stairway: A stairway, which is used, or intended to be used, by the public.

Handrail A rail to provide support to, or assist with the movement of a person.

Nosing: The rounded projecting edge of a stair tread.

Pitch line: The line joining the leading edge or nosing (if any) of successive stair treads within a single flight of a stairway.

Private stairway A stairway used, or intended to be used, by the occupants of a single household unit.

Service stairway means a stairway that is used, or intended to be used, occasionally by service personnel to gain access to spaces for maintenance and the movement of goods.