The terms for the different deviations are:
Straight Grain – the cells run in a straight direction

Interlocked Grain – the layers of wood slope alternately in different directions i.e. slope one way in a series of rings then reverse their slope in the next growth ring.

Wavy Grain – the cells run in a regular pattern of waves. It is difficult to plane and produces “fiddle back” figure.

Cross Grain – The fibers do not run parallel with the length of the piece of timber.

Ribbon Grain, Stripe Figure, Roe Figure – is alternating dark and light strips in a quartered timber formed by the different reflections of light on the interlocked grain.

Seen on the surface of dressed timber, figure is the name given to pattern or colour markings of the timber, providing one of the most valuable properties of timber.

One factor or a combination of several can cause figure.

a) The arrangement and direction of cells such as grain and irregularities effect figure. Ribbon Stripe is produced by interlocked grain; fiddleback figure is produced by wavy grain, and cross-grained timber produces a figure with light and dark patches.

b) Variations in color of Springwood and Summerwood will often produce stripes of different colors.

c) Knots and other growth irregularities produce beautiful figure. A burr or a burl is a lumpy growth on the side of a tree, it produces a confused figure. Maple produces a bird’s eye figure caused by pits in the surface of the wood being filled with bark then again being covered by growth.

Burr Elm
d) The method of conversion of the tree in to the boards will affect figure. Flat sawn boards produce figure revealing growth rings, quarter-sawn blocks show the medullary rays, this method works well to show figure in woods with predominant rays. This figure is called silver grain and is often a feature in Oak.

“Easy to Work” timbers, either by hand or machine means that the timber planes or cuts easily without blunting the tools or requiring much force. Most softwoods are “easy to work” and most tough timbers can be quite difficult. 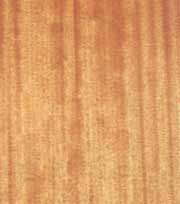 Articles on timber or wood next page is Uses for Wood