You are here: Home » Styles and Periods » Art Nouveau

Art Nouveau exploded onto the design scene in Paris and London at the turn of the twentieth century.

It was the first original style, that took inspiration from its surroundings, not history.

The late Victorians found this flamboyant and away-from-the-norm design rather shocking, and it was a love or hate situation for most. Some aspects of Art Nouveau saw a revival in the 1960’s.

The style consists of two distinct looks: curvy, elongated lines, or the more linear look of artists such as Charles Rennie Mackintosh. There were elements of stylised natural forms, such as flowers, roots, buds and seedpods, and the pre-Raphaelite female form was often seen also. Vertical lines, with height were a feature, with the whiplash line being prominent. From the stylised natural forms of flowers also came spider webs, peacock feathers, locusts, thistles and more, appearing on wallpaper, furniture and accents. Exotic woods, iridescent glass, silver and semi precious stones were the materials of choice in this elaborate and exuberant era. 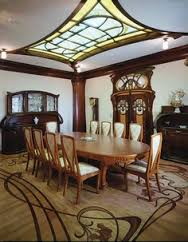 Most Art Nouveau furniture was based around the greatly influential designer, Charles Rennie Mackintosh. He was renowned for his extremely high-backed chairs in a glossy black lacquer. A more conservative option would be more curvy shapes, upholstered in stylised floral fabrics. Furniture however, was not a big element of Art Nouveau design, and the focus was mainly on beautiful and elaborate ornaments. Art glass was a must. The typical Nouveau glass was iridescent with patterns of liquid oil. Glasswork also came in more opaque matter, with detailed etched designs. Of particular mention is the Galle “cameo glass”, which has a raised design cut out of the glass with acid. Tiffany lamp -shaped like an umbrella with bold colored favrile glass between bronze and metal latticework was a symbol of the art nouveau period, very expensive, and has now had thousands of lesser quality imitaions made. Silver and pewter were also popular materials for ornaments, and it is not difficult to find Mackintosh-style clocks, frames and jewellery boxes today. 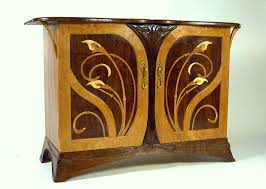 Period colors were elegant and subtle, and became known as the “greenery yallery”. Mustard, sage, olive, brown and gold, teamed with lilac, violet and purples, peacock blue, salmon and robin’s egg blue for the ultimate in elegance. Wallpapers included much of the highly stylized nature symbols, particularly flowers, feathers, birds and dragonflies. Fabric also featured much of the same designs.

Art Nouveau shared a lot of the same beliefs as Arts and Crafts. They both believed in quality goods and fine craftsmanship, but Nouveau embraced the convenience of mass production. Rococo style also featured, and botanical research and design was strong throughout.

Charles Rennie Mackintosh– architect and designer of furniture and jewellery

More information on Styles and Periods of Interior Decorating