Here are some useful lighting terms and definitions for home interior design and decorating. Understanding how light works in a room provides a designer with options for enhancing their design concept.

The Measures of Lighting

Light bulbs are rated in watts, a measure of the power they consume, but wattage does not tell how much light is produced; “lumens” do. Lumens per watt, meanwhile, measure efficiency (like miles per gallon) and different types of light bulbs can be different in efficiency. Incandescent light bulbs (the most common bulb found in homes) have changed little in the 110 years since Edison invented them and 90% of the electricity that feeds them is still wasted as heat. They produce about 17 to 23 lumens per watt. Fluorescent bulbs however, are three to four times more energy efficient yielding 67 to 83 lumens per watt. Definitions of Candela, Lux and Lumen.
Lighting Color Appearance
Lighting color appearance is usually expressed as a cool light or warm light. Color temperature is a way of describing the color appearance of the lamp. Color temperature is measured in degrees Kelvin. (Celsius is converted to Kelvin by adding 273. The coldest temperature that we know of is absolute zero and that is –273 degrees Celsius or 0 degrees Kelvin. I.e. 100 degrees Celsius is 373 degrees Kelvin.

Note that the color temperature of a light source raises with its thermal temperature paradoxically therefore the higher the temperature the cooler the light. The main point here is that color temperature and thermal temperature although related are not the same thing. For example, a candle’s color temperature may be 2000 degrees Kelvin and it gives a warm yellow light however some fluorescent tubes color temperature may be at 4000 to 6000 degrees Kelvin and generate a very cool light.
Ceiling and Wall Light Reflection
When lighting a room from the ceiling, as it has reflectance the room appears larger. Conversely when lit from the floor or table lamps the room will feel more intimate. Wall reflectance in large rooms is usually unimportant because of the room size, the walls will always seem distant however in a smaller room wall lighting is significant as it will appear to increase the size of the room (depending on the color), or bring the walls in closer by causing focus on them. If a wall is highly reflective the overall luminance to the room is increased and therefore increases the inter reflected component of the lighting.

Central pendant lighting on its own makes the room appear smaller as it only illuminates the center of the room. In this example it works well as it makes the bedroom feel intimate.

Lighting Glare Control
In brightly lit rooms or where some surfaces are reflective or a much lighter color than the surrounding surfaces, glare can be a problem causing discomfort or actually stopping the task being carried out. 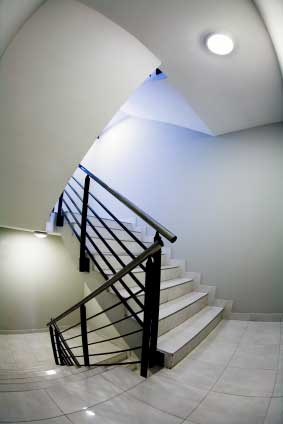 Stairs are an area that needs careful consideration when lighting as the change of levels means there is a high probability for glare. This example uses a bulkhead fitting with a translucent glass cover, reducing the glare.

This needs to be taken into account when designing the room. It is controlled by the lighting system and tools such as shades.

A simple rule of thumb that will usually increase glare is, long rooms because the distant light fittings come into the eyes angle of view.

Low ceilings in larger rooms, once again because the fittings come into the eyes angle of view. With dark decorations for example, a dark wall or ceiling with the light fittings mounted on it will cause glare through high contrast because of the lack of shades or diffusers to stop the direct harsh source of light. Electric lights with high BZ values because the proportion of light emitted from the light is more to the side than down.

Generally fittings with a BZ value of 3 tend to be good for working environments requiring reading and writing.